Almost ten years ago, Drew and I got in our van and drove to the teeny tiny Lancaster airport. I remember it was dark and very quiet. We were meeting friends there, they arrived and together we stood on the curb and waited. Not long after we got there, two dark suburbans drove down the long entrance and  stopped in front of us. This was our meet up point, as scheduled.

Two different Iraqi families slowly climbed out of the vehicles.  I had seen photos of the family we were waiting for and I knew they had two little girls, so I recognized them immediately.

It was awkward.  It was uncomfortable.   And yet, it was exciting.  I didn’t want to offend or do the wrong thing so I just stuck out my hand and introduced myself to the dad. There were quick intros made all around.  And then,  just like that, they piled into our van and away we went to get them safely settled at the house of a kind couple from our church. This family would stay there until we found better housing for them, got all their paperwork taken care of and hopefully found him a job.

Truthfully, I was scared. I had no idea what we were getting into. We were doing this with friends and with the support of our church, so I knew we weren’t alone. But still, so much responsibility rested on me.  I wasn’t good at details and responsibility!   I didn’t want to mess this up.

I remember looking at the little girls that night. SO tired. I wondered what the trip had been like for them and how they were feeling. What would it be like to move around to so many places?  Of course, I couldn’t begin to imagine.

It took us a little less than a year to help this family off into independence. The cultural and language barrier was the most difficult, but we all pushed through it. They had to be patient with us and we with them. We didn’t always agree and we didn’t always understand each other, but we all pressed on. We began to truly  care about each other.  I thought how lonely this must be for them and how they must miss their family. It takes a lot to get to the point where you must leave everything behind.

This family from Iraq changed my life.

It’s people who change us. They stretch us and open us up to new ways of seeing and believing. They take us past the news headlines and into the  lives of living, breathing human beings. I learned so much from them.  I learned so much from the experience of helping settle them.   They were so grateful.   I’m forever grateful that I was part of a church that made this a priority. I needed to be pushed into a new place of moving in this world.

A little over a year ago my parents welcomed a young Iraqi man,  Baraa,  into their home. It’s just the two of them and even though they don’t live in a big place, they invited him to live in their attic bedroom. The idea was to give Baraa a supportive and stable place to live. When I brought my kids at Christmas that year, my parents told us that Baraa was so excited to meet us and had already bought some video games for the boys to play with him. We arrived and it didn’t take much until my boys were up in the attic playing video games. I remember Baraa telling me he had  Call of Duty for them to play.   I had to explain that at that time,  Drew and I  didn’t let them play first shooter games. He felt so bad and apologized. “I’m so sorry, I didn’t know. Everyone in my culture plays these kind of games.” I’ll never forget how quickly Josh shot back- “Everyone in my culture plays them too!!!” A look of satisfaction on my son’s face as he glared at me. He was forever trying to work us to buy him these games.  We had to laugh.  So they settled on FIFA and the bond began. 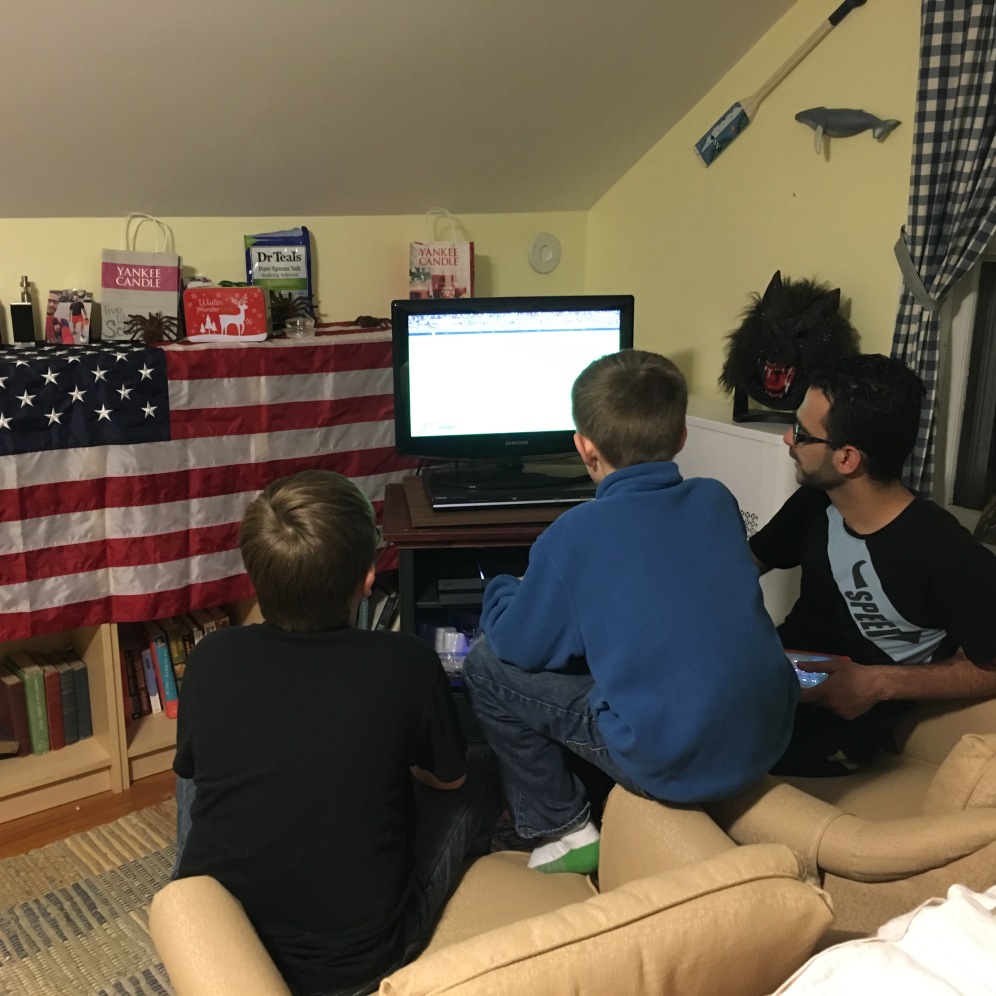 Me, Dad, Baraa and Mike

Since then much has happened in Baraa’s life. He has traveled back to Iraq to take care of his sick mother and visit his wife and son. His work with the US Army has jeopardized his safety but he felt he must go back to support them. After they were settled, he flew back and began working at a job he really likes. He’s been working tirelessly and waiting as the time counts down until they can come in October.

During our visit this Christmas, Baraa gave my kids a trip to Sky Zone with him as their present. I remember the day that they had planned to go, Baraa had the day off from work. As the time neared for them to leave, my dad remarked how he hadn’t seen Baraa all day. He was still up in his room. He told me he’d go check on him and remind him it was soon time to go.

I got up and walked into the kitchen and began talking with my mom.  My dad came back with tears in his eyes.

“Baraa’s really upset. He’s been up there all day reading the news and talking to friends and  family.”   My dad  choked up when as he continued on, he shared with us why.   There had been a suicide bomber that day at a market  in Bagdad.  The bomber drove  into the market area, making people think he was someone offering jobs to those waiting.   As the people came rushing towards the truck, hoping they would be chosen to work, the bomb went off.

We stood there in tears.     What do we say?   This was no longer just a headline.   This was a tragedy in the neighborhood of someone we loved.

The kids and Baraa went off to Sky Zone that day and had a great time. And all these moments, these stories, this friendship stays with us even in Chicago. When my parents visit us or are on vacation, they are also checking in with and face timing with Baraa. He has become very very dear to them.

Can you see how hard the news of this past weekend has been for him?   For his family?  His small son, and pregnant wife who live in a country that has been  now been put under a travel ban.   All the plans to be reunited are throw into the chaos and up into the air.   The pain and sadness of this is real.  As his second family, we don’t know what it is truly like, but still, we carry it with us.

My only request is this, please stay open.

Try to get past the headlines that draw us in on fear or on  outrage.   Look to the people and their stories.

The world is a scary place, of course.   But don’t let fear keep your heart closed.  Please,  let people like Baraa open it for you.

We’ve got so much to learn from each other.

2 thoughts on “No Place for Fear”